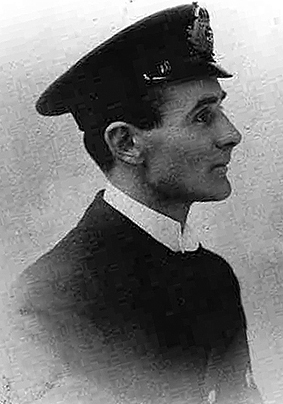 In 1959 Boxhall gave a talk at the Christchurch Red House Museum, which was attended by William Sandrey who wrote it up into an article entitled "A Talk by the Fourth Officer of the Titanic" that appeared in the May 1959 edition of the Nautical Magazine on pages 262-264.

This reprint of the article is courtesy of Brown, Son and Ferguson Ltd, with many thanks to Nigel Brown (director) and Richard Brown (www.skipper.co.uk)

A Talk by the Fourth Officer of the Titanic

I've a great admiration for those film chaps who had to endure each shot being taken three times over in cold October whilst floundering about in Ruislip Reservoir," said Commander Boxhall in a talk he gave at Christchurch Red House Museum.

Commander Boxhall was fourth officer on that ill-fated voyage in 1912. He is a spritely 74, and he told me there is one other surviving officer, Mr. H. J. Pitman, who due to eye trouble had later to transfer to the purser section.

Addressing his audience, he said there had never been any idea of a record-breaking run; extra coal would have been needed for that. As it was, to get away on the sailing date, they'd had to rob the bunkers of other ships of the company in port owing to the 1912 coal strike. When the Titanic struck, they were doing about 22 1/2 knots. He had done a tour of the decks and had just looked into his cabin when he heard the lookout sound three bells. He immediately went out on deck again, and a few minutes later, at about 10.40 p.m., when the ship struck, he felt no more than a slight tremor.

He had never known ice so far south, and the fatal piece was 40 miles further south than any reported position that had reached the bridge. The sea was absolutely calm, and thus the usual phosphorescence that played around the base of an iceberg in any sort of a disturbed sea was absent, and the lookout's job was made doubly difficult by there being no moon and the night pitch-black. However, visibility was otherwise good, and stars sparkled brightly in the frosty air.

The berg itself was quite a small one (it did not reach above the ship's rail), and was of the capsized type, hence it was of the blue underwater ice that is free of any of the crystallization that normally reflects even starlight.

As he walked forward he heard the alarm bells ringing for the closing of the watertight doors, and went down into the steerage section beneath the fo'c'sle head to find out if any damage had been done. Pushing through the steerage passengers who were now streaming upwards, he went down several decks, but could find no signs of water coming in. Back on the bridge he reported his findings to the captain. He was told to find the carpenter and sound the bilges. He met him coming up to the bridge to report and was told water was entering the mail compartment so he went below to assess the damage. He found mail bags floating about before he got very far down, and for the first time the seriousness of the situation was borne in upon him.

On hearing his report the captain ordered him to call out all hands and prepare the boats for lowering. This operation having been put into motion, he went along with some hands to get the boat covers off and prepare the lifeboats for sea. As he completed his section, he heard the look-out bell sound again, and went back on to the bridge. Through his telescope he verified the report as being another ship, and informed the captain. He was told to keep an eye on it; and when he asked if he should send up some rockets, was told to do so. He ascertained that this ship was under way and coming towards them.

The captain then told him that the position that had been sent out was the 8 p.m. dead reckoning one, and asked how it compared with the 7.30 p.m. star position, and was told that this showed the ship to be ahead of the D.R. position. Thereupon he gave orders that this should be given to the wireless operator for transmission. And that, explained Commander Boxhall, was why the Carpathia received two positions.

The ship on the port side was now clearly visible with portholes brightly shining, and contrary to the master's later given evidence, was still moving slowly. And when this ship, the Californian, arrived in port, the master decided not to make any report on the night's happenings; and if it had not been for a donkey-man who left her upon arrival, it is doubtful if she would ever have been identified.

The Titanic kept an emergency boat slung out-board ready for immediate launching, and the captain now instructed his fourth officer to take charge of this and get away with as many souls as he could safely carry. He heard the band strike up as he went along to carry out this order, and arriving at the boat found it had been filled under the direction of the chief officer.

Commander Boxhall pointed out that in those days no ship carried enough lifeboats to hold all passengers and crew, and it was on account of this disaster that the law was altered to enforce the carrying of adequate lifeboat accommodation. To the charge that some of the boats were not full when lowered, he explained they were eighty feet up, and when swung out-board, many passengers would not get in them. No doubt some, being quite unaccustomed to life afloat, were too nervous, and also could not bring themselves to believe the Titanic would sink.

After getting his boat (the last one to leave the ship) safely into the water, Commander Boxhall (who said he never saw any signs of panic) steered around to the starboard side of the sinking liner, but was afraid of getting too near in case he got swamped. Also, he had only one sailor in the boat with him; one woman pulled an oar, whilst another steered.

After the ship sank, he burnt a flare to attract the attention of the other boats in the hope of getting them all together, but to his joyful surprise, he saw an answering rocket from the eastward. The Carpathia had arrived. To guide her to him he burnt other flares, and his boat was the first to be picked up some three or four hours before the others were all found. And for Commander Boxhall and his passengers, although he was later able to give valuable assistance aboard the Carpathia, this was the end of a Night to Remember.

Speaking about the film, he said that at first he was not in favour of the project, and it took two months and the diplomatic visit of an old seafaring friend to persuade him to have anything to do with it. Even then he would not spend a night away from Christchurch.

However, he admitted he was not too displeased with the result and commented on the fabulous amount of money that was spent on technical equipment.

In answer to a question concerning the harrowing scene presented in the film of third-class passengers clamouring to get through a closed sliding gate aft, he said it may or may not have been true. American immigration laws insisted on this gate; if it had not been there, no immigrants would have been allowed to land. At night it was opened to allow the crew to wash down, but whether it had been closed again on this particular night he could not say.

In a few concluding words he again commented upon the great tragedy; the failure of the Californian to answer their distress signals. "The night was so calm," he said, "they could have come alongside and put a gangway aboard."

And I’m sure the thoughts of many of his audience, like mine, were left focussed with heartfelt emotion on the captain of the ill-fated leviathan, forced to stand there on his bridge watching hundreds of his passengers drown in icy blackness, whilst just across the water blinking at him were the lights of a ship which in less than half-an-hour could have saved them all.

The emphasis on the failure of the Californian elicited a "correction" and "unreserved apologies" a month later in the June 1959 edition of the Nautical Magazine, after being sent evidence that Boxhall's description of the Californian "still moving" and later not reporting the event were not true:

A TALK BY THE FOURTH OFFICER OF THE "TITANIC."

In the last issue of the Nautical Magazine an article by Mr. William Sandrey reporting an address by Commander Boxhall, ex-fourth officer of the Titanic, contained the following paragraph:

"The ship on the port side was now clearly visible with portholes brightly shining, and contrary to the master's later given evidence, was still moving slowly. And when this ship, the 'Californian' , arrived in port, the master decided not to make any report on the night's happenings; and if it had not been for a donkeyman who left her upon arrival, it is doubtful if she would ever have been identified."

Evidence since put before the Nautical Magazine proves conclusively that, in fact, the master of the Californian was in wireless communication with his owners (the Leyland Line), with relatives of those lost in the Titanic, and with the American Press before the ship's arrival in Boston. In addition, independent contemporary documents support the view accepted by the British Court of Inquiry that on the night in question the Californian lay stopped from 10.21 p.m. to 6 a.m.

Despite the adverse findings of the British Court of Inquiry, the question of whether or not the Californian could, in fact, have rendered any assistance to the survivors of the Titanic has been the subject of controversy for over 40 years. Nevertheless, in publishing the above correction, the Nautical Magazine is able to tender its unreserved apologies to anyone to whom distress might have been caused by the unfounded reflections on the character of the master of the Californian contained in the article referred to above. (The Nautical Magazine, June 1959 issue on page 326. )

-Boxhall's emphasis on the failure of the Californian elicited a "correction" and "unreserved apologies" a month later in the June 1959 edition of the Nautical Magazine (reprinted above). In 1962, during his radio broadcast he does not directly implicate the Californian, possibly due to this retraction.

-The article mentions that he "had just looked into his cabin when he heard the lookout sound three bells" confirming his later confession in 1962 that he "was sitting in my cabin having a cup of tea" whilst still on duty. (1962 BBC Radio broadcast)

-It also mentions that Boxhall "steered around to the starboard side of the sinking liner, but was afraid of getting too near in case he got swamped" which is a precursor to his later admission that he "found that there was such a mob standing in the gangway doors" that he aborted any attempt to take on further passengers. (1962 BBC Radio broadcast)