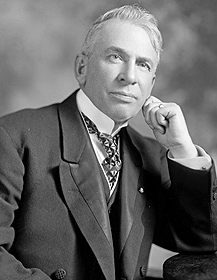 William Alden Smith was a U.S. Representative and U.S. Senator from the state of Michigan. After the 1912 sinking of the Titanic, Smith chaired the Senate hearings into the disaster. The audience was somewhat amused at his questions, which appeared to reveal great ignorance of the shipping world, though he claimed he was wanting simple answers for the benefit of the public. His report led to major reforms in maritime safety.

Titanic's Officers: 'Heroes' or 'Cowards'?
Despite early news reports praising Titanic's officers as heroes, Senator Smith went on to accuse the junior officers of deserting ship, resulting in him being 'reproved' by the British Mechant Service guild.

In a rare case of positive coverage, the front page of the New York newspaper, The Evening World, ran the headline "OFFICERS SANK WITH THE TITANIC SAVING WOMEN TILL THE END" on the 17th of April 1912, with a subheading going further: "HEROES OF TITANIC DIED AMID WORK OF RESCUE." Basing the herioc report on a "well authenticated source" although no name is given, it describes "the captain, officer and crew of the Titanic" displaying "unexampled bravery in the face of the most appalling marine catastrophe..." Captain Smith and all the principal officers heroically stuck to their posts to the end, encouraging, directing and assisting" passengers. "They worked like Trojans" it says "while death, sure and swift, stared them in the face."

This is in stark contrast with the many other newspaper reports after the arrival of the Carpathia which mostly portrayed the Captain and his officers in a negative light, describing everything from inactivity and negligence to gunfire and suicide.

Criticism in an official sense arose during the Senate Inquiry, chaired by William Alden Smith, that began at the Waldorf-Astoria Hotel in New York City the day after the survivors landed and later continued in Washington. Senior surviving officer Charles Lightoller was certainly not happy with his treatment and described the US Inquiry in his book, Titanic and Other Ships (1935) as "a colossal piece of impertinence that served no useful purpose and elicited only a garbled and disjointed account of the disaster; due in the main to a total lack of co-ordination in the questioning with an abysmal ignorance of the sea."

Ultimately, the US Inquiry report concluded that Captain Smith was to blame having shown an "indifference to danger [that] was one of the direct and contributing causes of this unnecessary tragedy." and the lack of lifeboats was the fault of the British Board of Trade, "to whose laxity of regulation and hasty inspection the world is largely indebted for this awful tragedy."

In his speech that accompanied his report on the 28th May 1912, Smith described "the warnings of shipmasters [that] fell upon deaf ears and officers and crew seemed to have regarded the paper bulletins of danger with absolute indifference." After the collision "no ship's officers formally assembled, no orderly routine was attempted or organized system of safety begun."

But it was the following passage that particularly riled the surviving officers:

"Among the passengers were many strong men who had been accustomed to command, whose lives had marked every avenue of endeavour, and whose business experience and military training especially fitted them for such an emergency. These were rudely silenced and forbidden to speak, as was the president of this company, by junior officers, a few of whom, I regret to say, availed themselves of the first opportunity to leave the ship.""

Such was the criticism from the Senate Inquiry that the Imperial Merchant Service Guild in the United Kingdom sent a letter to Senator Smith dealing with what was described as an "attack on the executive officer of the Titanic" and the "malevolence which characterised your speech." In particular they stated that "without a shred of evidence or a particle of truth, you accuse officers of the British mercantile marine of despicable cowardice."

The letter is dated 8 July 1912, and was printed in the Shipping Gazette and Lloyd's List of 7 August 1912. The secretary of the Imperial Merchant Service Guild, based in Liverpool, addressed Smith's accusation that "strong men used to command" were "rudely silenced by junior officers who availed themselves of the first opportunity to leave the ship" the letter stated: "These officers did nothing of the kind. It has been proved up to the hilt that in the midst of an appalling emergency perfect discipline prevailed, which was worthy of the best traditions of the British mercantile marine."

The letter than clarifies: "The four officers who left the ship in charge of the four boats did so acting upon definite instructions from their superior officers." It asks Smith to acknowledge his "error" and "withdraw it." The letter is supplemented with an extract from Lord Mersey's judgment, from the British Board of Trade Inquiry:

"The evidence satisfies me that the officers did their work very well, and without any thought of themselves. Captain Smith, the master, Mr Wilde, the chief officer, Mr Murdoch, the first officer and Mr Moody, the sixth officer, all went down with the ship while performing their duties; the others, with the exception of Mr Lightoller, took charge of the boats, and thus were saved. Mr Lightoller was swept off the deck as the vessel went down, and was subsequently picked up."

The letter concludes by saying: "This, of course, fully justifies our letter to you, and our feelings of indignation at your suggestion of gross cowardice on the part of worthy members of the British mercantile marine."