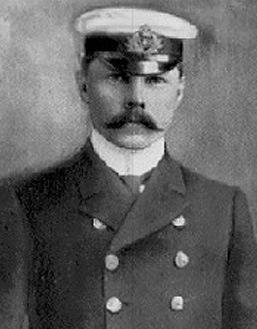 Not long after the premiere of the new Titanic film, "A Night to Remember" (1958) an article appeared in Herbert Pitman's local newspaper with an interview. It was published on the 2nd of August 1958 in the Somerset County Herald (now known as the Taunton Courier, and Western Advertiser) featuring on the front page.

In addition to views on the film (an "excellent representation") he also recalled some details of the disaster, including that it was his "job to supervise the lowering of boats, and he says that there was not the slightest suspicion of panic." Even while in the lifeboat some distance away he still thought Titanic would not sink: "I had no idea she was doomed. I thought she would take in a certain amount of water, yet manage to stay afloat. But the damage was too much." The article ends by noting that "Mr. Pitman is enjoying his retirement at the home of his nephew and Mr. and Mrs. A. Mainstone, and one of his main hobbies is stamp collecting."

The following is a full transcript of the article:

Somerset Survivor of The Titanic

His Views on the Film

One of the two surviving officers of the Titanic, the "unsinkable" White Star liner, which went down in April, 1912, with the loss of 1,502 lives, is Mr. Herbert J. Pitman, who lives at Pitcombe, near Bruton. His memories of the disaster, given to one of our representatives, is of topical interest with the showing of the film, "A Night to Remember" at the Gaumont, Taunton, this week. Last month, Mr. Pitman was a guest of the Rank Film Organisation, Ltd., at the world premiere in London of "A Night to Remember"—the story of the disaster. "The film is an excellent representation of what happened. and I cannot recall a single technical mistake," he said.

Our correspondent writes : When I called on Mr. Pitman with a view to his recollections of that April night in mid-Atlantic 46 years ago. I was met a civil yet determined, "Oh surely there is nothing more to tell."

Gradually, however, the story came out—the story of how he first knew about the liner hitting an iceberg, of how he was ordered to leave the ship on the fourth boat to be launched from the port side, how he watched the Titanic sink from half a mile away.

Mr. Pitman was Third Officer on the maiden trip of the Titanic from Southampton to New York. For him the impact with the iceberg came as a rude awakening —he was sleeping in his cabin— and his first rather drowsy thoughts were that the liner had anchored.

Realising within a very few seconds that this could not be the case, he hurriedly dressed and went up on deck where to his surprise everything seemed perfectly normal. The ship was still on an even keel, even though the blow had caused a gaping hole in her side, and it was not until about ten minutes later when the task of distributing lifebelts began, that the passengers began to realise that something was wrong.

No Panic at All

It was then Mr. Pitman's job to supervise the lowering of boats, and he says that there was not the slightest suspicion of panic. The fourth boat from the port side was to be lowered when the First Officer told Mr. Pitman to get in. "Three boats are already away without an officer so you can be the first to leave," were the instructions he received.

As the lifeboat, with its 40 passengers drifted further away from the stricken liner, Mr. Pitman himself still did not realise that the Titanic was going to sink.

"I had no idea she was doomed." he said. " I thought she would take in a certain amount of water, yet manage to stay afloat. But the damage was too much." The thousands of lights on board illuminated the Titanic in her desperate fight to remain afloat until just ten minutes before the actual sinking. This Mr. Pitman watched from the lifeboat about half a mile away, and the next few minutes were the most horrifying he has ever experienced.

The screams of more than 1,000 people still on board, as the liner made its final plunge to the sea bed, seemed to last an age, but, in actual fact, the waters were very quickly silent again.

About five hours later, Mr. Pitman and the other survivors were picked up by a passing British ship, which took them to New York.

Now Mr. Pitman is enjoying his retirement at the home of his nephew and Mr. and Mrs. A. Mainstone, and one of his main hobbies is stamp collecting. Although not belonging, by tradition, to a seafaring family Mr. Pitman left his home at Rimpton at the age of 16 to begin a four-year apprenticeship with a London firm of ship owners.

On sailing ships he visited many parts of the world but most of his trips were between the West Indies and Calcutta.

After gaining his Mate's ticket, he " went into steam " and on completion or about nine yeers at sea he was granted his Master's ticket. During the

1914-18 war, he served on H.M.S. Teutonic and throughout the last war was engaged on trooping duties. A 51-year association with the sea came to an end with his retirement 10 years ago.